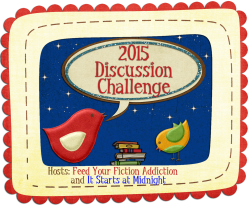 Apparently, BookTube and Book Blogs are at war, and I’m wondering if I’m the only one who didn’t get the memo?

I decided to write this post to share my thoughts on why this perception may exist, and why I think it’s important for members of both communities to not be afraid to speak up and say, “hey, there’s actually no bad blood here”.

My awareness of this “issue” began with watching Thoughts on Tomes video on YouTube. A couple of days later, I actually stumbled upon this post, which was written by the Blogger in question in Sam’s video.

First of all, it is my opinion that Book Blogs and BookTube are two separate communities. Yes, both groups love to read and put reviews out there on the inter-webby-waves, but we are two distinct platforms, which overlap at times, but aren’t really one and the same. When you think about it, BookTubers rarely participate in the same memes or tags that Book Blogs do, and Book Bloggers don’t collaborate with BookTubers on joint features (not necessarily because they don’t want to, but we’re on two different platforms, it would be tricky). I’m sure BookTubers read Book Blogs, and I know Book Bloggers watch BookTube, but that’s usually where the cross-over ends, and I don’t think this distinction should be viewed in a negative light. Book Blogs and BookTube essentially cater to different audiences, and it’s OK that there are two different communities. What isn’t OK is when those communities start being negative towards each other.

From watching videos, reading blog posts, and generally snooping around the Internet, it seems that there are a couple of main points of contention:

I don’t know if there are some Book Blogs out there that manage to make some cash from their hobby, but it seems to be more common-place for BookTubers. Not all BookTubers get paid to do sponsored content, but some of the “bigger” ones do. Personally, I’m divided on this. I think it’s great that they can be compensated for the ridiculous amount of time and effort it takes to make content (whether that’s written or video-based). However, I do question if it’s possible to remain objective when you are directly benefiting from promoting the product. This is still a relatively new practice, and I think that’s where most of the doubt seeps in – because it is a new practice, no one really knows how much ££ is made from these deals, and when something appears to be secretive, it’s automatically associated with being shady.

This perception likely comes from the number of ARCs BookTubers haul compared to the number of ARCs Book Blogs haul. As a Book Blogger, I am in awe of the number of hits BookTubers get, but again, different audience and different media platform. However, BookTubers seem to be insistent that actually, Book Blogs get more attention from publishers because they are longer established and publishers are more comfortable working with them. Hmm. I see the point, but I’m not sure I agree, BookTube has taken off in a big way and has been around for quite a few years now, and publishers are obviously going to want a piece of that pie. And that’s perfectly OK. But I can see why Book Bloggers want to make sure they’re not left behind.

I’m not on BookTube, so I’ve no first hand experience of this, but I’ve seen and heard about some people’s personal experiences, and they’re not always positive. I think in most cases though, this is a perception, more than a reality, and it can happen in the Book Blog community too. Book Bloggers and BookTubers will have certain friendship groups that have formed, which may give the appearance of a “closed group”, but the majority that I have interacted with are friendly and willing to chat/respond.

Recently, some Book Bloggers have started a BookTube channel (Asti and Tara), and I know there are some BookTubers who also have a Book Blog, though inevitably I think most will have more of a presence on one platform than the other, because we all need time to actually read the book too. I think this is a great way for the communities to be meshed together, as neither Asti or Tara can now be referred to as just one or the other.

Asti’s recent BookTube channel launch made me think of other ways the two communities could come together, so part of the reason I made this post, was to highlight the BookTubers I love and follow. BookTubers and Book Bloggers often do shout-outs, spotlights and other types of posts and videos, to highlight their favourite channels and blogs, but they rarely involve referencing members of the “opposite” community. I was originally planning to do this once I’d finished my Bloggy Love posts for all the Book Blogs I follow, but that will take some time to get to. So, be warned, at the end of this post is an extensive list of some BookTubers I love to watch!

Before you scroll down and open numerous tabs on your browser, tell me what you think of the BookTube versus Book Blog debate? Share your thoughts with me in the comments!