A Girl Called Fearless by Catherine Linka, to be published May 6th 2014 by St. Martin’s Press.

Read: April 2014
Genre: Young Adult/Sci-Fi/Dystopia
Source: Publisher – this does not affect my opinion of the book.
#Pages: 368
Get It Now: Wordery

As always, I’ll try to review without giving away any major spoilers! I’m on a Dystopian binge at the minute and I really enjoyed this book.

Goodreads Synopsis: Avie has the normal life of a privileged teen growing up in L.A., at least as normal as any girl’s life is these days. After a synthetic hormone in beef killed 50 million American women ten years ago, only young girls, old women, men, and boys are left to pick up the pieces. Fathers still fear for their daughters’ safety, and the Paternalist Movement, begun to “protect” young women, is taking over the choices they make. This is a story about fighting for the most important things in life—freedom and love.

A Girl Called Fearless started slowly for me, it took a while to get into this world because there wasn’t much of an introduction, it just launched right in at the deep end, so I had to mentally catch-up on who the characters are and what is going on. Catherine Linka wanted to write a book that when people finished reading it, they would say, “I think that could really happen”, and I definitely got that feeling with this book. It’s set in the near-future, and while we might want to believe this wouldn’t happen – that womens’ rights would be so suppressed and that they would basically become a “commodity” in a male-dominated world, I do think that in this scenario, it is within the realms of possibility.

To enjoy this novel I think you need to side-step the super-logical. I’ve seen reviews that comment on the lack of international response to the pandemic and how society could never be permitted to fall this far (has everyone forgotten the Holocaust already?!). I didn’t think of these things at all while I was reading this book – it’s fiction, and enjoyable fiction at that, let’s not psycho-analyse the whole thing people!

Once I got into this story I found it hard to put down, especially from around the middle of the book until the very end. I was slightly disappointed by the ending, not because of how the story ends but because I smell a sequel, and I was really hoping this would be a great stand-alone novel (I was at 99% of this eBook and begging that somehow the whole thing would miraculously wrap up in the remaining 1%, alas, it didn’t). There were twists and turns that I wasn’t expecting, and a few moments that almost made me shed a tear (or five), particularly towards the climax of the action and towards the end of the book.

Avie and Yates are pretty likable characters, we go through Avie’s struggles with her and it is easy to have sympathy (and a little outrage?!) for her situation. I found Dayla to be pretty annoying but I definitely connected with Sparrow and her story broke my heart. I also LOVE Ms. A, get on yo’ feminist soapbox, you go girl! Hawkins is a pretty terrible character, and I think it would have been interesting if he wasn’t, if he believed in fighting the Paternalist Movement from the inside-out, as this would have thrown the whole Avie and Yates insta-love in a whirl, but then I don’t think I could handle another love triangle so soon in the year… Luckily, there are no predominant love triangles in A Girl Called Fearless (so far, but I think I can smell one brewing with Luke…). The Avie and Yates insta-love was a slight issue for me, and I think the fact that they were childhood friends was supposed to generate this idea of plausibility – but it didn’t. That didn’t annoy this Book Geek though, sometimes I love me a little insta-love.

The book is set in the privileged leagues of society, and also for a time among the outcasts (by choice) who don’t choose to participate in “regular” society, which is fine, except there’s no middle ground. The majority of the characters in the book seem to come from the uber-rich elite, and I think it would have been good to have a point-of-reference for the “average” girl and how she struggles with this new society and its laws, perhaps one of Avie’s close friends could have come from an “average” family to draw a comparison as to how this pandemic affected all areas of society and not just the polar extremes (it probably would have made it even more relatable for us average Joe’s too!).

“Avie, knowing how to do something is different from using that knowledge. Buddha and Jesus are my guides, but if my life’s on the line, I’m calling on Smith and Wesson.”

“White, black, yellow, tan, it didn’t matter what your skin colour was, the country needed an ocean of chemo drugs, but it only had a lake.”

Based on how my review scale is structured and what each rating stands for, I have to give this a solid 4/5. Sure, there are some areas I think could be improved; I had a particular problem with Avie being involved in a high-speed car chase having never driven before – I passed my test two years ago, that just isn’t possible! But I think there is loads of potential for the sequel (assuming there is one?), and so many possibilities following on from this novel. It wasn’t overly a “quotable story” – you know how I love “quotable stories” with excellent and atmospheric (even if they are unrealistic) one liners. It will be really interesting to see where Catherine Linka takes this, and I will definitely be adding the follow-up to my TBR list. 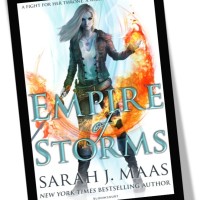